Conducting research was a fundamental basis for the formation of the PWCC. Research has led to improvements in the harvesting and processing of Pacific whiting. It has also provided means to greatly reduce the occurrence of bycatch in the catcher-processor sector. Research has also been conducted on the status of the whiting resource and other groundfish stocks, especially rockfish. This information has improved scientific knowledge and aided management of west coast groundfish fisheries. The PWCC conducts our own research and also participates in cooperative research ventures with the National Marine Fisheries Service and other fishing organizations.

A 2017 Biological Opinion (BiOP) suggested that CPs could have effects on short-tailed albatross, an endangered species. The BiOp required NMFS to conduct research, assess potential mitigation measures, and “implement measures that minimize potential for short-tailed albatross interactions with trawl gear.” In November 2017, a NMFS workshop was held with catcher-
processor fishermen and captains on this topic.

Subsequent to the workshop, PWCC collaborated on a cooperative research project with NMFS and Oregon Sea Grant designed to collect and analyze information about seabird interactions with the vessels. The project, titled – Detecting and Mitigating Cryptic Seabird Bycatch in West Coast At-Sea Hake Fisheries –, was conducted in 2018 and 2019. Objectives were to: (1) enhance seabird data collection, (2) test mitigation techniques and (3) conduct outreach and engagement to advance best practices of bycatch prevention.

NMFS and the PFMC concluded wotk on this topic in 2021. The PFMC’s Groundfish Endangered Species Workgroup, in their June 2021 Report, summarized the current state of thinking relative to seabird/trawl interactions:

“NMFS made the recommendation that no further action is required on trawl seabird bycatch at this time, as their research demonstrates that the risk of trawl gear to short- tailed albatross off the West Coast is significantly less than previously considered in the BiOp. NMFS intends to convene a public meeting/workshop to present these research results, hopefully before the end of the year. The hake catcher processor fleet continues to explore best practices to minimize seabird bycatch to the extent practicable, and NMFS supports these voluntary mitigation measures. USFWS concurred with the NMFS recommendation and considers Reasonable and Prudent Measure 2/Term &amp; Condition 1 to be met at this point.”

NMFS convened a workshop in December 2021 to discuss recent research and conclusions relative to the need for additional management measures. The workshop was well attended by federal and state fishery managers, federal protected species managers, and fishery participants. NMFS and USFWS reiterated their conclusions that additional management measures do not appear necessary at this time and encouraged fishery participants to continue to explore development of best practices and mitigation measures to reduce risks to seabirds.

The joint U.S. and Canadian integrated acoustic survey is the primary fishery-independent tool used to assess the distribution, abundance, and biology of the coastal Pacific hake stock.  The acoustic survey is generally conducted during odd years and includes all waters off the coasts of the U.S. and Canada thought to contain all portions of the hake stock older than age-1.  The survey biomass index is based on measurement of age-2 and older hake.

The survey conducted in 2011 indicated the lowest Pacific hake biomass estimate in the 36-year history of the survey.  The results were highly uncertain because they were inconsistent with the results of the 2009 survey, which estimated a substantially larger biomass.  However, managers had no choice but to use this information in determining harvest levels for 2012, which resulted in a 36% reduction in the 2012 Pacific hake quota relative to 2011.  This significant decline in available harvest and the fact that the next acoustic survey was not scheduled until 2013, compelled the PWCC to lead an effort to secure a supplemental acoustic survey in 2012.

The direct result of the supplemental 2012 cooperative hake acoustic survey was a 44% increase in the 2013 quota relative to 2012.

NMFS highlighted the rationale behind and success of this project in this video.

A beneficial result of slowing the fishery has been an increase in the product recovery of the harvested fish. Pacific whiting is primarily made into surimi, a minced fish product used to make imitation crab products. Yield is the amount of edible product derived from unprocessed fish. In 1996, prior to formation of the PWCC, product recovery was about 17%. Since formation of the cooperative, PWCC vessels have achieved an average yield of 24% in surimi operations. This 40% improvement in yield means that over 10 million pounds more food was produced from the same number of fish by using fishing and processing methods made possible under the harvest cooperative agreement.

PWCC vessels now have time to search for and harvest schools of larger fish that have better yields than smaller fish. The harvest cooperative also allows the fleet to better meet changing market needs. While whiting has historically been used to produce surimi, the more rational fishing made possible under the PWCC agreement allows member companies to shift production to more labor intensive products, such as fillets.

A major area of uncertainty in the assessment of Pacific whiting stock abundance is the level of recruitment of young fish into the fishery. To improve estimates of whiting recruitment, the PWCC partners with NMFS-Northwest Fisheries Science Center (NWFSC) and Southwest Fisheries Science Center’s Santa Cruz Laboratory (SCL) to conduct an annual survey. Started in 1999, this cooperative survey investigates the abundance and distribution of juvenile whiting and rockfish.

Data from 2001 and 2002 surveys showed relatively low abundance. However, abundance appears to have increased in recent years. In 2003, the index of abundance showed a sharp increase. The 2004 survey indicated that whiting young-of-the-year (YOY) abundance was three times that surveyed in 2003. A strong 2004 year class would be a sign of an increasing abundance trend. Data from the 2005 PWCC-NMFS survey is under review. 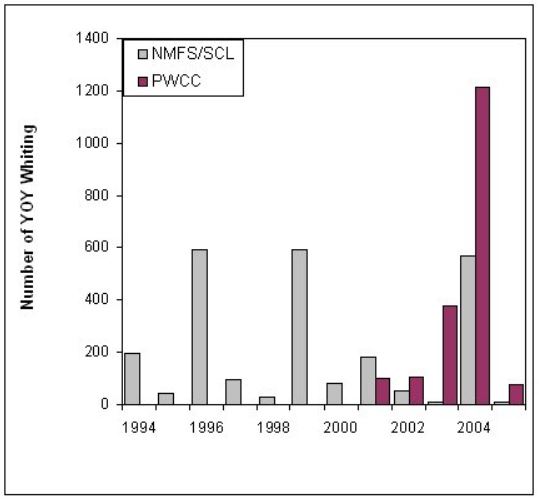 Another major uncertainty in the Pacific whiting stock assessment is the ability of a hydro-acoustic survey to fully estimate the absolute abundance of the stock. Several factors are involved and combined into a survey “catchability” or estimate of how much of the stock is captured by the acoustic survey. The higher the level of catchability, the greater the percentage of the population is assumed to be sampled.

A significant source of survey variability is the acoustic energy reflected by a fish; this is also known as “target strength.” The estimate of target strength is an important parameter in the conversion of acoustic backscatter to estimates of absolute abundance.

The Pacific Coastal Current drives the environment in which Pacific whiting is a dominant member. Variation in the coastal current regulates environmental seasonal trends and interannual differences. The most severe form of interannual differences are the periodic El Ninos and La Ninas, these natural phenomena have major impacts on fish productivity and distribution.

Variation in the coastal current effects the distribution and migration of Pacific whiting. In very warm years, whiting distribute to the north and have been observed in large numbers to southeastern Alaska, and individuals have been captured as far North as the Bering Sea. Interannual variation in productivity also affects the reproductive success of Pacific whiting. Generally, but not always, large year classes appear to occur in La Nina years, and very weak year classes in El Nino years.

During the past several years the whiting fishery has experienced some remarkable fishing with the recruitment of the very strong 1999 year class. The abundant whiting form dense schools, which results in good fishing and a low occurrence of bycatch. Part of the success of the 1999 year class relates to changes in ocean conditions that have brought about an increase in zooplankton abundance, providing prey for whiting and other marine fish. However, the very large population of whiting (from the 1999 year class) could increase competition between whiting and other groundfish, because the large amount of whiting may lead to increased predation and consumption of large amounts of zooplankton. Moreover, because whiting are a major piscivorous predator, there is the potential that fish species (including overfished and rebuilding rockfish) could be adversely affected by whiting predation. 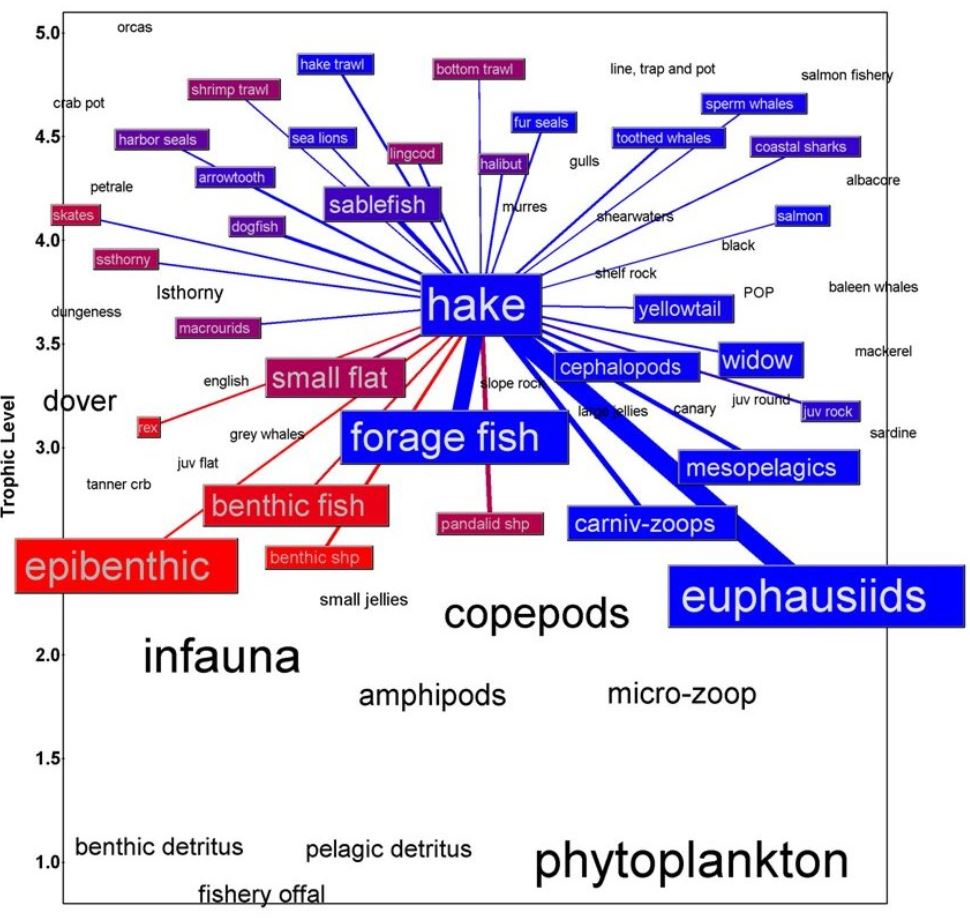 Figure from Field, 2004. Isolated view of the trophic position of Pacific hake in the ecosystem relative to major prey and predators. Red flows represent benthic energy pathways. Blue flows represent pelagic energy pathways. The intensity of the of blue or red in the each box represents the proportion of energy flowing along the pathways. The width of the bars connecting the various boxes represents the biomass flux from prey to predators. The estimated trophic level is along the y axis.

Similar relationships exist in many gadoid dominated ecosytems where whiting and other cod-related fish are the major groundfish predator. Where cod or cod-like species have increased in abundance invertebrate populations have declined in abundance. For example, shrimp fisheries off Kodiak Island in Alaska declined dramatically a few years after strong abundance increases in pollock and Pacific cod. Prior studies of Pacific whiting food habits have shown that whiting largely feed on krill, shrimp, and other invertebrates; but will also prey on other fish. Canadian studies have shown that whiting can consume large amounts of herring when favorable oceanographic conditions occur off British Columbia. When Pacific whiting abundance is very high, the stock can greatly reduce food resources in the ecosystem. Thus, it is fair to ask, what are the ecological effects of rapid increases in whiting abundance, especially to overfished groundfish species?

Unfortunately, there is little data to quantify the amount of fish consumed by Pacific whiting. Anecdotal information from the 2004 NMFS research survey off the continental shelf indicates that whiting were observed feeding heavily on juvenile rockfish. To help answer this question, the PWCC initiated a stomach collection program to start to gather information about predator-prey relationships that occur in the fish caught by the fishery.

In 2004, the PWCC initiated a program to investigate alternative survey methods for widow rockfish in cooperation with the NMFS-Northwest Fisheries Science Center (NWFSC) and Fishermen’s Marketing Association. During the first year of the program, a data base of major widow rockfish grounds was developed through joint fishermen/scientist workshops. The results of these workshops helped define principal survey areas and seasonal variations in widow rockfish distribution.

In March 2005, the NWFSC chartered the F/V Excalibur and conducted a pilot acoustic survey on widow rockfish grounds off of Newport, Oregon. The preliminary survey work indicates that widow rockfish can be located, observed, and measured with standard single frequency fishery acoustics techniques. The pilot project used underwater video to verify what the acoustic signal was surveying. The pilot project was able to examine patterns of variability in widow rockfish at the sites visited, which led to recommendations for future pilot work. Ultimately, one goal of this project is development of an index of widow rockfish abundance using these techniques. 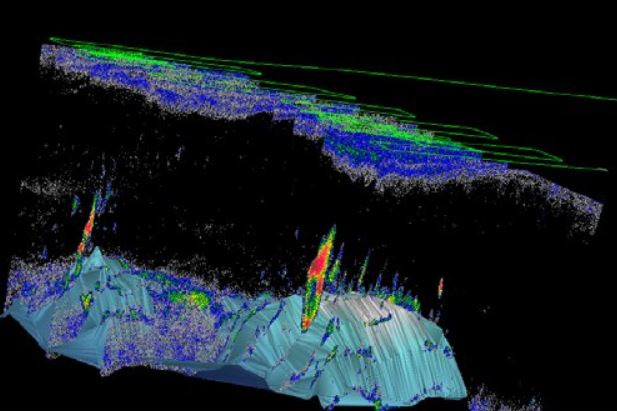 Three dimensional view of fish echo sign on Halibut Hill in March 2005. Large midwater schools are believed to be widow rockfish. Trackline is shown on surface. 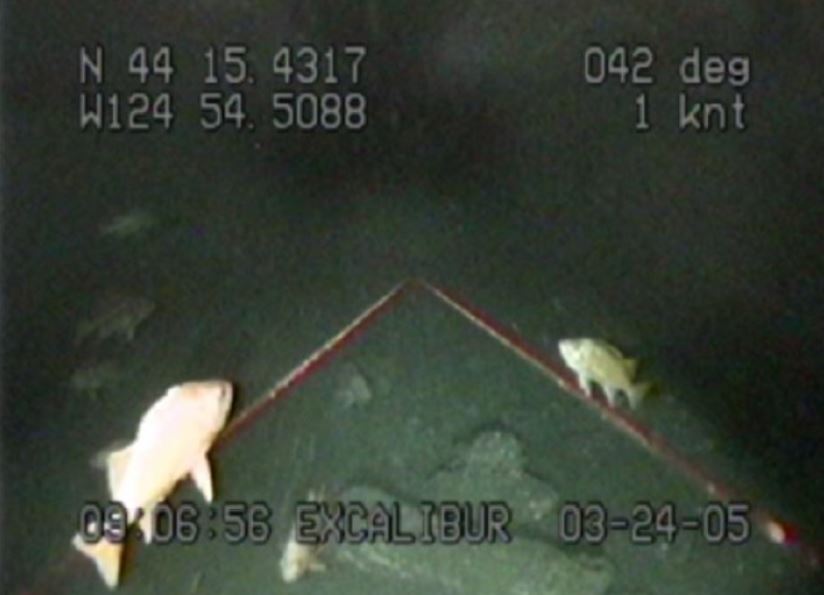 PWCC is a member of the Groundfish Conservation Trust (GFCT) an association of west coast industry groups interested in enhancing groundfish research. The GFCT is currently funding research directed toward alternative rockfish survey methods with efforts focused on canary rockfish. Researchers at Oregon State University are investigating the sex ratio of canary rockfish in rocky habitat at several sites along the Oregon-Washington coast.